As part of our service placement and internship Nick and I had the opportunity to attend and observe a school dedication. The school was funded in part through the excess profits from two mattress shops. The owner of these shops and the program director of the school is part of the Hopeline network and we were scheduled to interview here for our ongoing study on SMEs in Ghana.

We arrived at the school late because of lack of directions and bumpy roads but still early as the chairs and tent arrived at the same time we did. We waited around for a bit for the event to commence. Soon the drums started to play and there was a commotion to the left of us. The Paramount chief from the Ga tribe was arriving. (The Ga are an ethnic group that have lived in and around the greater Accra region of Ghana for years.) The chief, under an umbrella, with his many constituents surrounding him walked slowly to the beat of the drum. They stopped in front of the drums and the chief did a small dance. I’m not sure what this symbolized but it definitely made everyone aware of his presence. As the chief sat down under the canopy in front of the school building another chief began making his way toward the school. When he sat down another came in behind him. Chief after chief arrived at the school, danced in front of the drum, and greeted all the other chiefs by shaking their hands moving from right to left. After it all there were about thirty ‘distinguished guests’ consisting of chiefs, queen mothers, linguists, development chiefs, and religious leaders from the surrounding communities. All were showing their support of the school. It was a powerful scene. 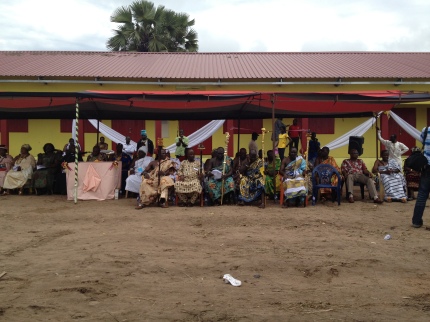 The scene itself was fascinating. After the chiefs had all arrived, libation was poured to thank the ancestors for keeping them in favor. (The drink of choice for libation has historically been palm-wine but since colonial times schnapps, the “white man’s drink” has been used.) The event continued with speeches by various individuals who had worked hard to make this day happen. The chief voiced his approval of the project. And finally the children showed their appreciation by performing a song and dance for all in attendance. It was quite a sight.

Come to find out the chiefs were late arriving to the dedication as well. Not because they operate on ‘Africa time’ but because they were held up by a group of protestors. As what was later explained to us, the ownership of the land the school is built on has been historically disputed between the Ga tribe and the Fante tribe. (The Fante are an ethnic group that lives in the central coastal region of Ghana, directly adjacent to the Ga.) The Ga chief gave the school permission to use the land. The Ga people are going to be the main beneficiaries of this school. The Fante people have been making it difficult for the school to be built. In fact the construction of the school building was put on hold for two years due to disruptive actions by the Fante. The issue, while not dead, is more or less mute at this point as there are really not a whole lot of constructive actions left for the Fante as the school building has been completed. Outside of some sort of violent attack, which seems to be out of the question, all the Fante can do is disrupt the dedication and voice their displeasure. Sure enough shortly after the ceremony began a Fante man began yelling and voicing his opinion about who has rightful ownership of the land.

The school seems to be a great project that promises to have a tremendous impact on the community. The children of this community have been historically marginalized by the public school system. The children often sleep and work all day on the beach. The children now have an honorable place to learn and develop and take full advantage of the opportunities in their future. The story of how this school came to be is encouraging. The school building has been donated by Ash Foam, a Ghanaian foam manufacturer. The schools expenditures are financed in part through the proceeds from two Ash Foam distribution shops in the community. So in terms of local engagement and financial sustainability this project is a pillar of success. However the project is not without it’s flaws. As mentioned earlier, the tribal disagreements between the Ga and the Fante have lead to some animosity between these two groups of people. The sad reality is both groups of people in their respected communities could surely benefit from a school like this, or at least the use of the land.

Throughout this semester and specifically with my time interviewing business owners in the Hopeline network, I have been trying to answer one specific question. The question is, what effects does private sector business have on the development of a community? This has been an interesting question to look at here in Ghana for many reasons. The day of the school dedication the answer just got more complicated. It seems more and more like I will never come to a final answer on this question. Just another lifelong question.

The school, on the surface, looks to be the golden egg of examples of the positive community effects of private sector business. The school definitely meets a dire need in the community. Children of this community have never been able to take advantage of the growing list of opportunities available for Ghana’s youth. This school will give them a chance to pursue their dreams. However the ethnic battle over the land is troublesome. This is an issue that needs to be resolved. Perhaps before the children are helped. Without resolving this ethnic issue a kingdom community will not be developed. The community will find it increasingly difficult to love God AND love neighbor. With the school built and operating the issue is sure to be exacerbated. If the school is as successful as promised this generation of Ga children will grow up with scads more opportunities and freedom than the Fante children down the road. Greater inequality will most likely ensue and positive community will not be developed.

Perhaps this is a life lesson. Tough questions are not answered easily. The more I learn the less I know. I guess this points to the fact that we are never really done learning.

2 thoughts on “Dedication of A School”