It has been 20 years since the start of perhaps 100 of history’s darkest days. I was only 3 at the time, hopelessly unaware of world events. Over the weekend I mentioned to a collogue here in Kenya that Monday is the 20 year “anniversary” of the Rwandan Genocide. He, being much older than I, remembers the events more clearly, responded, “Has it really been 20 years already!? It seems like it was yesterday.”

This all makes the piece The New York Times ran on over the weekend, Portraits of Reconciliation, even more unbelievable and haunting.

Last month, the photographer Pieter Hugo went to southern Rwanda, two decades after nearly a million people were killed during the country’s genocide, and captured a series of unlikely, almost unthinkable tableaus. In one, a woman rests her hand on the shoulder of the man who killed her father and brothers. In another, a woman poses with a casually reclining man who looted her property and whose father helped murder her husband and children. In many of these photos, there is little evident warmth between the pairs, and yet there they are, together. In each, the perpetrator is a Hutu who was granted pardon by the Tutsi survivor of his crime. 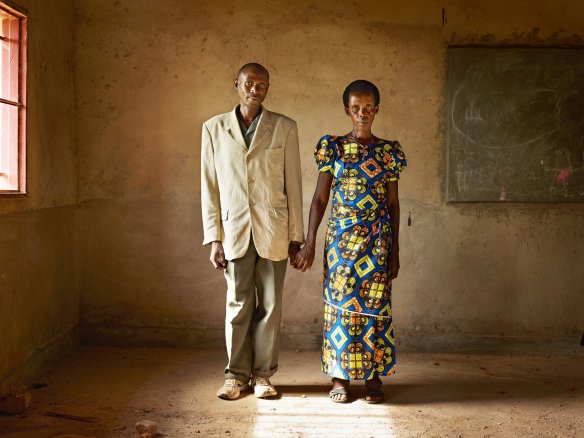 NDAHIMANA: “The day I thought of asking pardon, I felt unburdened and relieved. I had lost my humanity because of the crime I committed, but now I am like any human being.”

MUNGANYINKA: “After I was chased from my village and Dominique and others looted it, I became homeless and insane. Later, when he asked my pardon, I said: ‘I have nothing to feed my children. Are you going to help raise my children? Are you going to build a house for them?’ The next week, Dominique came with some survivors and former prisoners who perpetrated genocide. There were more than 50 of them, and they built my family a house. Ever since then, I have started to feel better. I was like a dry stick; now I feel peaceful in my heart, and I share this peace with my neighbors.”

Please take the time to view the entire piece. It is quite […something…], I’m actually having trouble finding words to describe it.

Two decades later, how is Rwanda doing now? Well, it depends on who you ask and what you mean by “doing well”. On the one hand Rwanda is doing great! The lush country is an encouraging success story of a small, land-locked African country achieving growth and raising standards of wellbeing. Rwanda has made tremendous strides in fighting corruption in it’s courts, government offices, and law enforcement agencies. They have even rolled out a successful universal health insurance scheme!

On the other hand the Rwandan government, particularly their President Paul Kagme, have been criticized for regulating the media, squelching freedom of speech, restricting the formation of political parties based on ideology, physically threatening and attacking political opponents, and nurturing violent rebellions in neighboring, resource rich, DRC.

To be sure evaluating the situation in Rwanda is complicated. One of my more interesting memories from my semester in Ghana was in class at The Institute of African Studies; we had a 2-hour discussion about whether or not “democratic rights” (i.e. free press, free assembly, free speech, etc.) are ispso facto rights. The openness of the pre-genocide Rwandan radio system significantly aided the coordination of the Hutu attack of the Tutsi. But does this reality give President Kagme the power to jail any potential opposing political actor? The answer is probably, “no” but where do we draw the line?

So, is President Paul Kagme good or bad? Is he an authoritative ruler or a benevolent leader? The answer is certainly ambiguous and speculative. To be sure, Kagme is indeed interesting, as the following profiles show.

Kagme recently sat down with Foreign Affairs (@ForeignAffairs) to talk about the genocide, his presidency, and the future of Rwanda – Rebooting Rwanda: A Conversation with Paul Kagme.

Jeffrey Gettleman (@gettleman) (my favorite non-East African East African journalist) profiled Kagme in The New York Times last year by eloquently writing about the actual interview. It is a long read, but all the while fascinating – The Global Elite’s Favorite Strongman.

There is quite a discussion about what the analogy should be for Rwanda. Is it the Singapore of Africa, as some (including Kagme) suggest? Singapore is also a tiny country that wrestles in an economic weight class far above its own. Singapore similarly turned its back on a few democratic rights in order to achieve its goals. The analogy doesn’t hold as well as some would like. Some see the political power in Rwanda as overly centralized and potentially detrimental to future growth and political renewal. Rachel Strohm (@RachelStohm), a PhD student in political science at UC Berkeley, recently wrote an insightful blog on just this topic – What is the right analogy for Rwanda?

There is also debate about what kind of analogy Rwanda is for other situations in other countries. Certainly Rwanda is a useful analogy to help us think about the world’s failure to respond to strategic acts of violence. But does reflecting on Rwanda’s history help in considering the situations in Bosnia, Libya, Egypt, or more recently, in Somalia or Syria? Certainly the situation in Syria differs in key ways (i.e. the attacks were more an issue of state policy rather than a dissenting revolt). Likewise the situation in Somalia is no less convoluted. Foreign Policy (@ForeignPolicy) has a nice analysis of the issue of what pedagogical role does Rwanda’s history play today – If We Can Let Syria Burn, Have We Learned Anything at All from Rwanda?

For more information and links to more websites and articles on Rwanda’s history, the genocide, and everything that followed see Laura Seay’s (@texasinafrica) blog post – Sunday Linkages: Rwanda at 20 Years